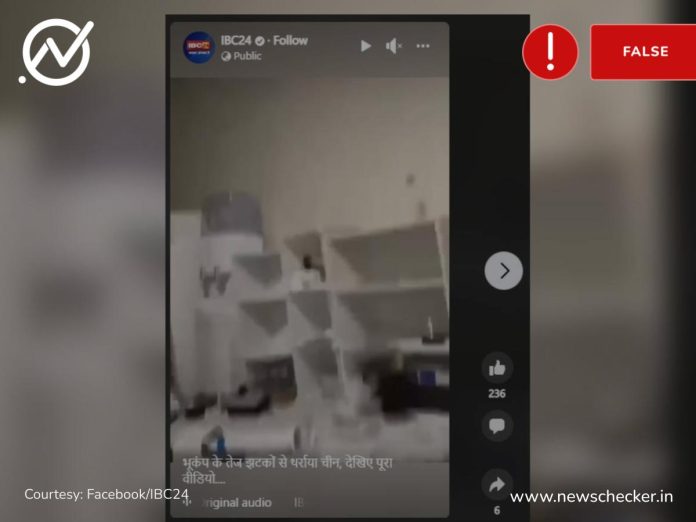 After an earthquake of 6.8 magnitude hit the south-west Sichuan province of China on September 7, 2022, a total number of 74 people have been reported dead according to reports. The earthquake was supposedly the deadliest since 2017, and soon, social media saw a host of false images and videos being linked to the quake.

One such video showing appliances and furniture rattling wildly, spilling its contents before being toppled entirely, is being widely shared on social media. Those sharing the video claim that the dramatic footage shows the recent earthquake that rocked south-west China. Newschecker found these claims to be untrue.

The video has been shared on Facebook by a verified page called @IBC24. The page describes itself as the official page of IBC24 (Indian Broadcast Channel 24), which it states to be a channel previously known as Zee 24 Ghante Chhattisgarh, the news channel was established on October 1, 2008. The station concentrates on local news from India’s Madhya Pradesh and Chhattisgarh regions.

We started our investigation by conducting a reverse image search of the key-frames of the video on Google and found a tweet on the official Twitter account of Russia Today on 13th February, 2021 along with the caption ‘Japan’s earthquake led to power outages in the affected regions, and videos showed intense shaking inside homes, with furniture rattling and possessions flying off surfaces.’

The original source of the video has not been identified by Russia Today.

Using this as a clue, Newschecker conducted a keyword search with the words “Earthquake in Japan” and “February 2021” and found a report by La Parisien titled ‘Japan: 7.3 magnitude earthquake off Fukushima, no tsunami warning’ which also contained the video but did not provide a credible source for it.

According to the article, on 13th February, 2021, just after 11pm, an underwater earthquake with a magnitude of 7.3 occurred off northeastern Japan. No serious damage was observed, no tsunami alarm was issued, and no abnormality was found on the concerned nuclear power stations, which were the same ones damaged in the 2011 tragedy while six people were severely injured out of the total 114.

Newschecker also found a report by the Los Angeles Times titled ‘5 videos of the magnitude 7.3 earthquake in Japan’ uploaded on their website on 13th February, 2021 which contained the same video that is now viral in the Chinese context.

Newschecker found that although the source of the video could not be identified, the video showing appliances and furniture rattling wildly before being toppled by a strong quake has been present online since at least 13th February, 2021, and is not connected to the recent earthquake in south-west China.