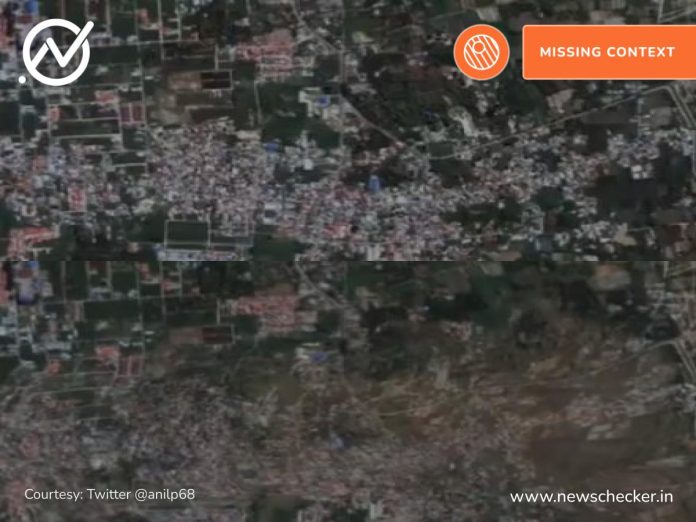 A 5.6 magnitude quake struck Cianjur town in West Java, Indonesia earlier this week killing at least 272 people, injuring scores, and displacing thousands of others. The rescue operation is still underway in the earthquake-prone archipelago. Several videos showing the aftermath of the disaster that jolted Indonesia on Monday are being widely shared on social media. In this backdrop, a video claiming to show the satellite view of land shifting during the Indonesian earthquake is going viral on social media platforms.

Several Twitter and Facebook users shared the one-minute-fifteen-second-long-video with a narrator explaining the “liquefaction” in Indonesia following the earthquake. The footage is widely shared with the caption, “Satellite video of the Indonesian earthquake. SCARY! The entire land mass is getting shifted!! Unbelievable!!”

Newschecker received the video multiple times on our WhatsApp tipline (+91-9999499044) requesting to be fact checked.

We conducted Google reverse image search on the keyframes of the viral footage, which led us to multiple reports from 2018 on an earthquake and subsequent tsunami that hit Indonesia in September that year.

One such report by AP, dated October 2, 2018, featured an aerial view showing the aftermath of the disaster in the archipelago. It was captioned “This Oct. 1, 2018, satellite image provided by DigitalGlobe shows the Petobo neighbourhood in Palu, Indonesia, after an earthquake and subsequent tsunami caused substantial damage and liquefaction in the village.”

On comparing the image searched in the AP report with keyframes of the viral footage, we could thus conclude that both visuals depict the same incident.

Another report by Daily Mail, dated October 2, 2018, carried keyframes of the widely circulated footage as the satellite images showing the devastation caused to the Balaroa neighbourhood of Palu after the earthquake and subsequent tsunami.

Several other news outlets carried the same image to show a satellite video of  soil liquefaction in Indonesia’s Palu after a 2018 earthquake. Such reports can be seen here, here and here.

Following this, we translated keywords “Satellite Image, “ Land Liquefaction, “ Palu,” & “ 2018” in Indonesian with the help of Google and looked up the same on the search engine. This yielded a YouTube video by Tribunnews, dated October 2, 2018, titled (translated from Indonesian) ‘ Sighting of Satellite Photos at the ‘Liquefaction’ Location of Moving Mud after the Palu Earthquake, Houses Dragged to the Ground.’

The video used keyframes from the viral clip to depict the situation in Palu after the earthquake and tsunami.

The search also led us to a video report by Indonesia based Kompas TV, dated October 6, 2018, titled (translated from Indonesian) ‘Here’s a Satellite Image of Land Liquefaction in Petobo.’

It featured the viral clip with the description, “After the earthquake that rocked Palu and Donggala, a phenomenon of soil liquefaction occurred in the Petobo housing complex, Central Sulawesi.In the video, one can clearly see how the residents’ settlements are being dragged away by the mud as a result of liquefaction.Liquefaction is a change in solid soil into liquid. This phenomenon usually occurs after an earthquake”

Further, we noticed the watermark of ‘DigitalGlobe Maxar’ on the top right corner of the Kompas TV video. Taking a clue, we looked up Maxar’s website and found a release dated October 2, 2018 titled ‘Open Data Response for the Indonesian Earthquake and Tsunami.’ It carried the “Before and after images of the Palu region,” – the aftermath picture is the same as one the keyframes of the viral video.

Additionally, we also found a tweet by the late spokesman for Indonesia’s disaster management agency, Sutopo Purwo Nugroho dated October 6, 2018. It carried the viral footage with a caption in Indonesian which roughly translates to, “Soil liquefaction process in Palu City as a result of recorded WorldView Satellite imagery with a pixel resolution of 0.5 metres. Houses and buildings were dragged away by the mud that appeared as a result of the earthquake and submerged them. The SAR team continues to work on evacuation in this area. Victims continue to be found.”

Furthermore, we heard “this is Dabho 7” in the voiceover in the beginning of the viral video. A keyword search for “Dabho 7, “Satellite, “Liquefaction, & “Indonesia” on YouTube threw up the full one-minute-fifteen-second-long video with the same voice over. Notably, the viral video was uploaded on YouTube channel of one ‘DAHBOO777’ on October 8, 2018 with the title ‘Crazy! Satellite Timelapse Shows Liquefaction During Indonesia Earthquake.’

The description of the video read, “The earthquake and tsunami caused enough damage in Palu. But few people have seen or understand the process of liquefaction, here caught on satellite in a time lapse.The National Disaster Mitigation Agency (BNBP) spokesperson in Indonesia, Sutopo Purwo Nugroho, overseeing the relief and rescue efforts in Sulawesi, shared a time-lapse of satellite imagery on his Instagram account. It shows how liquefaction of the soil devastated neighbourhoods on September 28 in Palu, Central Sulawesi.”

An earthquake triggered a tsunami that hit Indonesia‘s central Sulawesi island in September 2018  led to the liquefaction of the soil in the Palu area. The viral video shows a satellite view of the same. More reports on the incident can be found here, here and here.

Viral post claiming to show the satellite view of the Indonesian earthquake lacks context. Visuals are not from the recent quake in the country. The source of the video has been traced back to October 2018.

Vasudha Beri
Vasudha noticed the growing problem of mis/disinformation online after studying New Media at ACJ in Chennai and became interested in separating facts from fiction. She is interested in learning how global issues affect individuals on a micro level. Before joining Newschecker’s English team, she was working with Latestly.
Facebook
Twitter
WhatsApp
Linkedin
Previous article
Visuals Of Underwater Volcanic Eruption In Sumatra? No, Simulation Video Viral With False Claim
Next article
2018 Video Peddled As Mass Conversion Event At Qatar FIFA World Cup