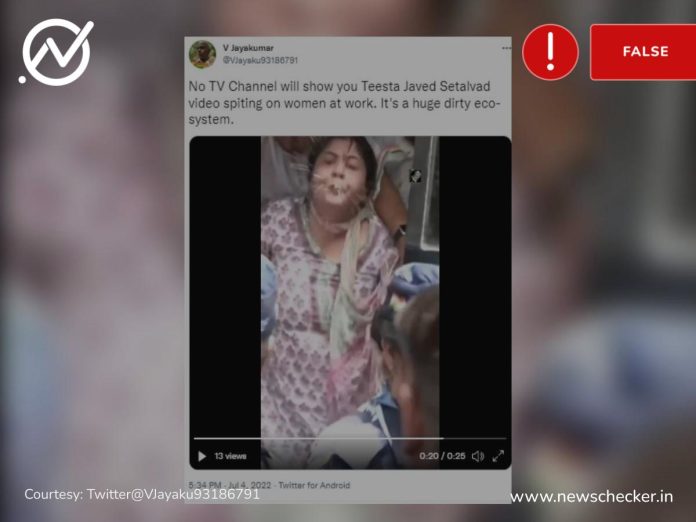 Teesta Setalvad, a Mumbai-based activist, was arrested on June 26, 2022, by the Gujarat Anti-Terrorist Squad (ATS) in connection with a fresh case of forgery, criminal conspiracy, and providing false evidence to the court with intent to frame innocent individuals in the 2002 Gujarat riots case.

Now, a video is doing the rounds on social media showing a woman spitting on some female security personnel after being forced into a bus along with others. It is being claimed that the woman in the video is Teesta Setalvad. Newschecker found the claim to be untrue.

The video has been shared on Facebook by user ‘Saravanan Shanmugam’ along with the caption “No TV Channel will show you Teesta Javed Setalvad video spitting on women at work. It’s a huge dirty ecosystem.”

Also Read: Udaipur Murder: No, Rajsamand SP Did Not Chase Accused On Bike To Arrest Them

Upon reverse searching one of the key-frames of the video on Google, we found that a YouTube user uploaded the video on June 22, 2022, and titled it as ‘Acting president of mahila congress Netta’.

With the help of some keywords like ‘Congress’, ‘Netta D’souza’, ‘spitting’, we found that the viral video was also tweeted by news agency ANI on June 21, 2022. As per ANI’s tweet, the woman seen spitting in the video is Mahila Congress President Netta D’Souza who along with party workers was protesting against ED for questioning Congress leader Rahul Gandhi in the National Herald case in Delhi.

NDTV also published a news report on the video with the title Congress Leader Netta D’Souza Spits On Cops During Protest Against Rahul Gandhi’s Questioning uploaded on June 21, 2022.

According to the article, during a protest by Congress workers in Delhi against the ED’s questioning of Rahul Gandhi in the National Herald case, Netta D’Souza was seen spitting on a group of police officers. Netta D’Souza spat from inside the bus when the Delhi Police detained Congress workers.

Newschecker’s investigation reveals that a video of Congress leader Netta D’souza spitting on security personnel is being passed off as Teesta Setalvad spitting on the police while being arrested.

Vaibhav Bhujang
Vaibhav is a part of Newschecker’s English team, where he spots and debunks all kinds of misinformation, making the rounds on the internet. A Journalism graduate from St. Xavier's College, Mumbai, he holds an M.A degree in Philosophy and an M.Phil from Delhi University.
Facebook
Twitter
WhatsApp
Linkedin
Previous articleUdaipur Murder: No, Rajsamand SP Did Not Chase Accused On Bike To Arrest Them
Next articleOld Hoax Of ‘Cancer Patient Throwing Away Money’ Resurfaces