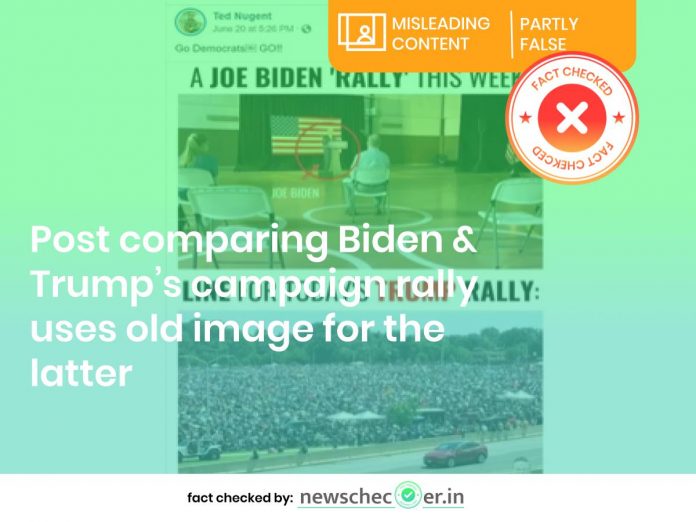 As Presidential candidates for this year’s United States elections hold their rallies amidst the ongoing pandemic, related fake news is also on the rise.

The claim in context is one such example, which shows a misleading image of current President Donald Trump’s recent rally in the United States. We debunk these images below.

The photograph of Biden’s campaign rally in the claim is authentic. You can watch his entire campaign speech in the video below. At the very beginning and end of the video clip you can observe the participants seated apart on chairs as shown in the claim.

Reuters coverage of Biden’s rally in Pennsylvania includes a similar image showing social distancing measures in place in the audience.

Infact Donald Trump posted the exact picture in the claim on his Twitter Profile on 20 June with the caption, “Joe Biden’s rally. ZERO enthusiasm!”

The image which claims to show Trump’s rally on 20 June is not from Tulsa, Oklahoma, where his recent campaign event was held. The image is in fact from a Rolling Thunder Washington D.C. event which shows a crowd in the parking lot of the Pentagon in Arlington, Virginia. While we couldn’t trace the original photograph in the claim, photographs of the same venue captured from different angles show similarities such as the White open jeep, umbrella tents and the tall green trees behind the crowd.

In reality, Trump’s re-election campaign rally was held in the Bank of Oklahoma Center in Tulsa, Oklahoma with a number of blue rows empty. Known for falsely boasting of never having an empty seat at one of his events, President Trump and his staff members apparently stood gazing at the half-empty arena from backstage. Read more about this event in these news reports.

Facebook has added disclaimers of false news on a number of similar posts with these images.