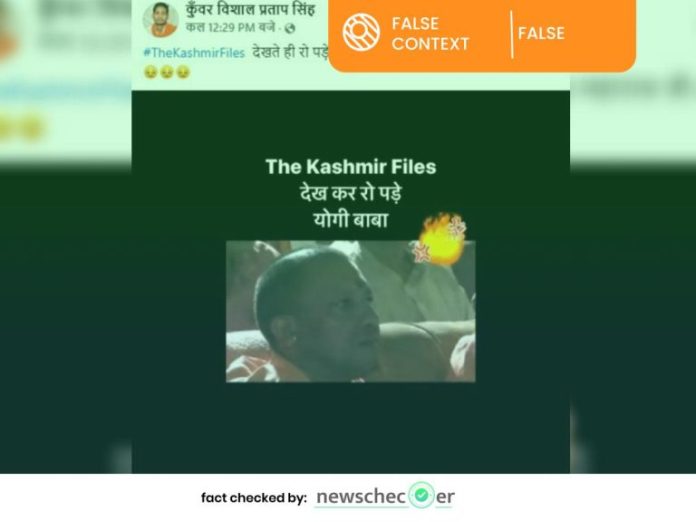 With the release of The Kashmir Files, a film based on the Kashmiri Pandit exodus from the valley, social media has been abuzz with misinformation and unsubstantiated claims. One such video of UP CM Yogi Adityanath crying after watching The Kashmir Files is going viral on social media.

The video has been shared by Twitter user @BhuvaneshKonar1. The post has garnered 11,000 views along with 487 likes and 151 retweets along with the caption ‘UP CM @myogiadityanath ji went to the cinema hall to watch “The Kashmir Files” probably could not stop himself and cried. Think how terrible and barbaric that scene must have been, which our Kashmiri Hindus themselves must have endured.’

Directed by Vivek Agnihotri, the film, The Kashmir Files is based on video interviews of the first generation victims of the Genocide of Kashmiri Pandit Community In 1990. According to some estimates, notably by the Kashmiri Pandit Sangharsh Samiti (KPSS), more than 70,000 families fled between 1990 and 1992. Recently the  film has been made tax-free in Uttar Pradesh as announced by UP CM Yogi Aditanath on his social media.

Newschecker conducted a Google reverse image search on the key-frames of the viral video to ascertain its authenticity and found a tweet from 20th October, 2017 shared by Twitter user @rose_k01 along with the caption ‘Touching Emotional Moment UP CM Yogi Adityanath couldn’t hold back his tears & cried during the program “Ek Diya Shaheedon ke naam”. Newschecker found that the video had gone viral in 2017 too.

Upon performing a keyword search, Newschecker found a news report by ABP News uploaded on their Youtube channel on 17th October, 2017.

According to the report Yogi Adityanath got emotional and started crying during an event held for martyrs of the Indian Army. During the event a song from the film ‘Border’ was played after which UP CM Yogi Adityanath burst into tears.

Upon further investigation, Newschecker also found another news report on the Zee News Youtube channel according to which the event for Army martyrs was held in Gorakhnath Mandir in Gorakhpur, during which the UP Chief Minister got emotional.

This article was originally done by Newschecker’s Hindi team. You can read the article here.

According to the investigation conducted by Newschecker, the viral video of Yogi Adityanath crying while watching the film The Kashmir Files is an old video from 2017 shared as new.

Vaibhav Bhujang
Vaibhav is a part of Newschecker’s English team, where he spots and debunks all kinds of misinformation, making the rounds on the internet. A Journalism graduate from St. Xavier's College, Mumbai, he holds an M.A degree in Philosophy and an M.Phil from Delhi University.
Facebook
Twitter
WhatsApp
Linkedin
Previous article
Did US State Of Rhode Island ‘Recognise’ Kashmir Genocide After ‘The Kashmir Files’ Release? No, Vivek Agnihotri’s Claim Is Misleading
Next article
Misleading Reports Alleging Killing Of A Second Terrorist Involved In IC 814 Hijack Go Viral