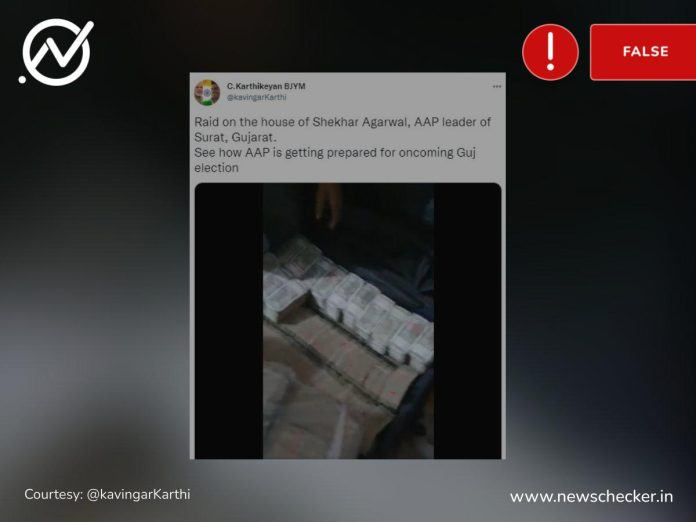 A video showing officials, purportedly from the Enforcement Directorate, counting wads of cash using a counting machine even as mounds of currency of notes are seen piled up on the side, is being widely shared on social media. Users sharing the video claimed it to be an ED raid on the property of “Shekhar Agarwal, an AAP leader from Surat, Gujarat”. The claims come amid the party’s busy campaigning in the state for the Assembly elections due  later this year. Newschecker has found the claim to be false.

Newschecker began by looking up reports of any such raid with the keywords “raid AAP Shekhar Agarwal”, which did not throw up any relevant news reports.

On closely analysing the video, Newschecker observed that the language heard in the viral video was Bengali, and not Gujarati. We then ran a reverse image search of keyframes of the video, which led us to this news report on Youtube from India Today, titled “Mobile Gaming App Scam: ED Recovers Massive Cash From Kolkata Businessman Linked To E-Nuggets App”.

Uploaded on September 11, 2022, the description of the video read, “The Enforcement Directorate (ED) is conducting searches at six locations in Kolkata while probing an alleged case of fraud through a mobile gaming app. A team of ED officials, accompanied by bank officials, raided the premises of businessman Aamir Khan in the Garden Reach area of Kolkata on Saturday and seized Rs 7 crore in cash and property documents. The raid is underway and cash counting machines were brought in to ascertain the exact amount of cash recovered.”

Taking a cue, Newschecker then ran a Google search on the keywords “ED raid Aamir Khan Kolkata”, which led us to multiple news reports from the past week, including HT, NDTV, The Print. According to NDTV report, dated September 11, 2022, a search operation by ED led to the recovery of over ₹ 17 crore from the premises of a businessman in Kolkata. The anti-money laundering agency raided six locations in Kolkata including one in Garden Reach area, where the ED brought in cash-counting machines to count the amount recovered. “The search started on Saturday morning at the premises of Aamir Khan, who ED officials say is not cooperating with the agency. The counting of cash ended on Sunday morning,” the report read. We observed that the video used in the news report, too, is the same viral clip.

Also, barring the viral claims, we could not find any indication that a member of the party by the name “Shekhar Agarwal” existed. We also looked up the party’s official website that also did not have any mention of such a member. We then reached out to AAP regarding this. We will update the article once a response is received.

Viral video of ED raids on Kolkata businessman’s house falsely claimed to be “raid on AAP leader’s house in Surat”.