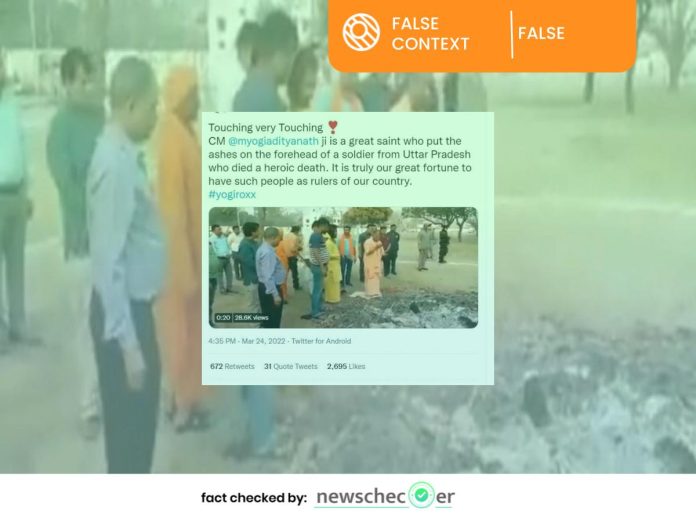 A twenty nine-second-long video claiming to show Uttar Pradesh CM Yogi Adityanath applying ashes of “a soldier from Uttar Pradesh who died a heroic death” on his forehead with the song ‘Teri Mitti’ playing in  background, is doing the rounds on social media platforms. Newschecker found the claim to be untrue.

Several Twitter users shared the video of Yogi Adityanath with the claim to show a “great saint who put the ashes on the forehead of a soldier.”

Last week, Yogi Adityanath took oath as the Chief Minister of Uttar Pradesh for a second consecutive term after the BJP and its allies won 273 seats out of total 403 assembly seats in the state. CM Yogi won the Gorakhpur Urban seat with a massive margin of more than 1 lakh votes. According to the Election Commission of India, Adityanath received 1,03,390 more votes against his nearest rival SP candidate Subhawati Upendra Dutt Shukla.

Also Read: Viral Video Of Yogi Adityanath Crying At The Screening Of The Kashmir Files Is An Old Video From 2017 Shared As New

To verify the veracity of the video claiming to show Yogi Adityanath applying ashes of slain soldier, Newschecker conducted Google reverse image search by using the keyframes of the viral clip of Yogi Adityanath and found that the same video was shared by National President Of Bhagwa Kranti Sena Dr Prachi Sadhvi on her official Twitter account on March 22, 2022.

We looked up the official Twitter account of Yogi Adityanath and found a video of ‘Holi Milan’ at the premises of Gorakhnath Temple. In multiple frames of the video, we spotted the person in yellow attire who can be seen accompanying Yogi in the viral clip as well.

Continuing our investigation, we did a keyword search for ‘holika dahan Gorakhpur Yogi Adityanath ashes’ on Google and found multiple reports on the same. One such report by ETV Bharat stated, “Yogi Adityanath led the procession of Lord Narsingh from Ghantaghar Chowk after applying ’tilak’ to sages and people present there with the ashes of Holika Dahan at Gorakhpur temple on Friday.”

In a video report by News18, the anchor can be heard saying that Yogi played Holi with the ashes of Holika.

According to a report by APB Live, celebrations of Holi festival at Gorakhnath temple begin after doing ’tilak’ with the ashes of Holika Dahan.

Notably, Yogi Adityanath celebrated the Holi festival in Gorakhpur this year. You can read reports on the same here, here and here.

The viral video claiming to show Yogi Adityanath applying ashes of a slain soldier from Uttar Pradesh actually shows him applying the ashes of Holika Dahan as per the rituals.

Vasudha Beri
Vasudha noticed the growing problem of mis/disinformation online after studying New Media at ACJ in Chennai and became interested in separating facts from fiction. She is interested in learning how global issues affect individuals on a micro level. Before joining Newschecker’s English team, she was working with Latestly.
Facebook
Twitter
WhatsApp
Linkedin
Previous article
Did An ‘Indian’ Manager Bar A Veiled Woman From Entering Restaurant In Bahrain? No, Viral Claim Is Misleading
Next article
Viral Image Of AAP Leader Raghav Chadha Wearing Makeup Is Morphed