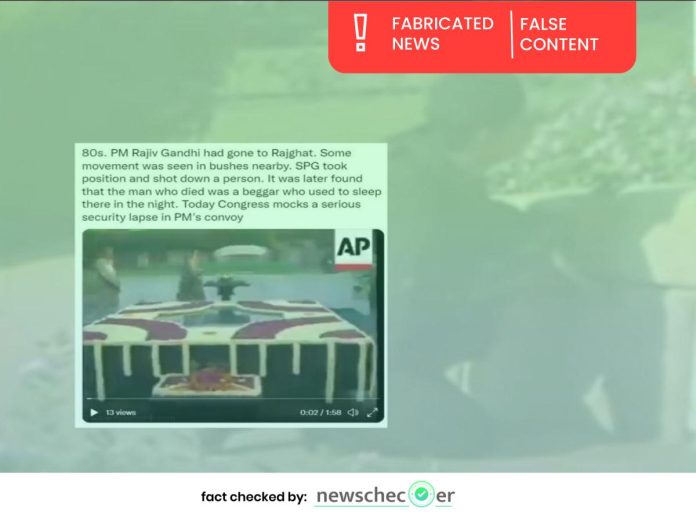 An old video showing former PM Rajiv Gandhi paying tribute at Rajghat is going viral with the claim that during the visit, his Special Protection Group (SPG) shot down a man after noticing “some movement in the bushes nearby”. It further adds that the deceased who was gunned down by Rajiv Gandhi’s security was identified as a “beggar who used to sleep there in the night.” However, Newschecker has found out that the viral claim is fake and no one was killed during Gandhi’s visit to Rajghat as depicted in the video.

The video is going viral on Facebook as well.

The video claiming to show that former PM Rajiv Gandhi’s security gunned down a beggar during his visit to Rajghat is going viral after the recent ‘security lapse’ during incumbent PM Narendra Modi’s visit to Punjab. On January 5, PM Modi was scheduled to address a rally in Ferozepur ahead of the assembly elections in the state. However, he had to cut short his visit and skip the rally after an alleged security lapse.

PM Modi’s convoy was stuck on a flyover around 30 kms away from the National Martyrs’ Memorial for 15-20 minutes as the road was blocked by the protestors. To probe the matter the Supreme Court has set up a five-member panel, headed by retired SC judge, Justice Indu Malhotra.

A report by the Times Of India, dated January 12, 2022, quoted SC as saying, “Such a sensitive issue relating to the security breach of the PM cannot be left to one-sided inquiries by the Centre or the state government.” The apex court has stayed the proceedings before the inquiry committees set up by the Punjab government and the Centre.

To check the authenticity of the claim that Rajiv Gandhi’s security killed a beggar during his visit to Rajghat, Newschecker first split the viral video in keyframes and conducted Google reverse image search and came across a video uploaded by AP Archive on its official YouTube channel on October 4, 2018 with the title ‘Rajiv Gandhi Is Shot At During Anniversary Celebration For The Late Mahatma Gandhi.’

The description regarding the video stated, “Indian PM, Rajiv Gandhi, while attending anniversary celebration for the late Mahatma Gandhi, was shot at by a Sikh hiding in a gazebo. The man was captured and Gandhi unharmed.”

To further investigate the incident, we conducted looked up keywords ‘Rajiv Gandhi Assassination Attempt by man Hiding in Gazebo’ on Goggle and set the time frame from October 1986 to November 1986. We came across a report by the Los Angeles Times, dated October 2, 1986 which stated that “ Prime Minister Rajiv Gandhi escaped an assassination attempt today when a man hiding atop a vine-covered gazebo fired a homemade pistol at him and President Zail Singh. Neither leader was injured.”

Another report by Washington Post dated October 3,1986 stated that six person were wounded in an assassination attempt on Rajiv Gandhi. It did not mention anyone’s death either.

We also came across a report by India Today, originally published on October 31, 1986 and later updated on February 18, 2014, which identified the gunman who opened fire at Gandhi as Karamjit Singh.

To further know about Karamjit Singh, we ran a keyword search on Google for ‘Rajiv Gandhi Assassin Attempt Karamjit Singh’ and came across a video interview of Singh. The video was uploaded on a verified YouTube channel called ‘Living India News’ on June 5, 2016 with the title ‘Interview With The Man Who Tried to Kill Rajiv Gandhi​ | Karamjeet Singh.’

An interview of Karamjit Singh was also uploaded by Daily Post Punjabi on its official YouTube channel on February 18, 2020.

The claim that the former PM Rajiv Gandhi’s security, SPG, killed a beggar during his visit to Rajghat is false. The viral video being circulated with the claim shows a failed assassination attempt on Rajiv Gandhi in 1986 in which a gunman named Karamjit Singh was arrested. No death was reported.

(This article was originally published in Newschecker Tamil)