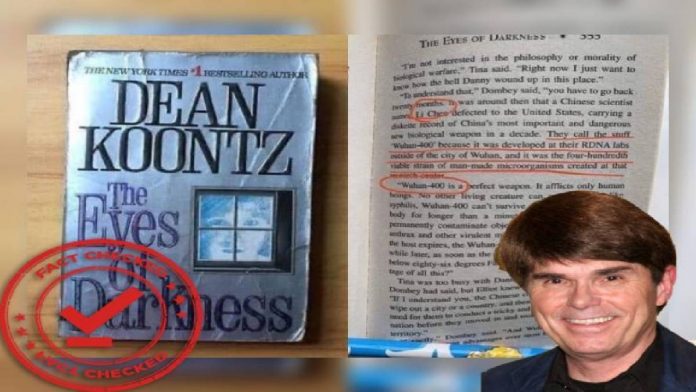 The Eyes Of Darkness, a novel written by Dean Koontz, in 1981, predicted the coronavirus outbreak. 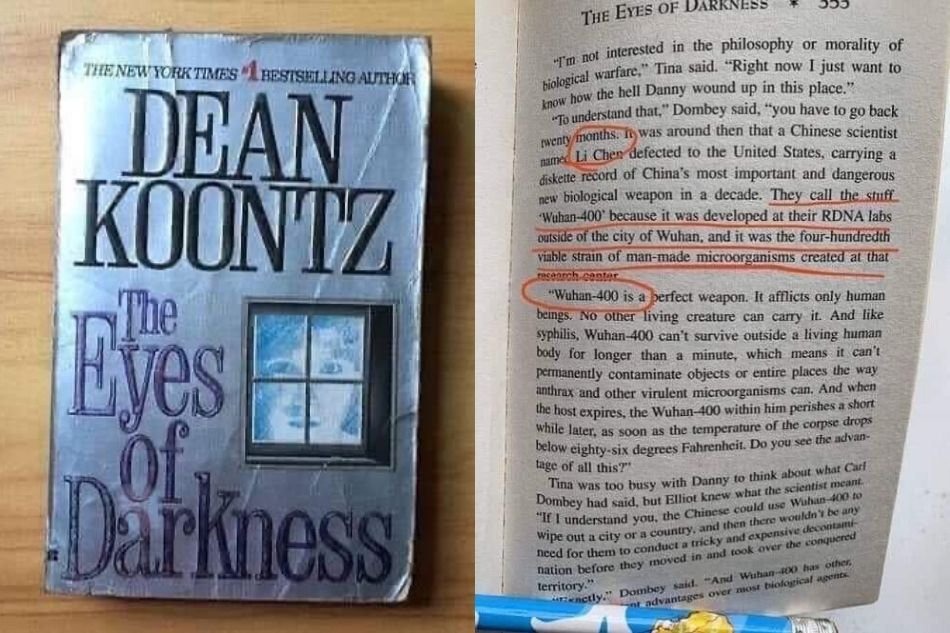 Netizens are making queer claims in the name of the novel coronavirus. We have debunked several viral hoaxes pertaining to the coronavirus but as soon as there is a major update, the frequency of viral claims rises. The latest addition to the list of the claims we have debunked is of a prophecy about the coronavirus outbreak in a novel namely ‘The Eyes of Darkness” that was written by American writer Dean Koontz in 1981 and in a book namely ‘End Of Days: Predictions and Prophecies About the End of the World’ by Sylvia Browne & Lindsay Harrison in 2008. The claim states that the writer Dean Koontz successfully predicted the coronavirus outbreak back in 1981. In order to back the claim and to give it an authentic fabric, pictures of pages of the book are produced along with the claim. The dismay caused by the outbreak has led to several hashtags on social media as netizens want to express their thoughts on the issue. Some of the netizens are sharing information provided by reliable sources while many others are relying on WhatsApp forwards. India, ever since the outbreak emerged, has witnessed a plethora of misinformation shared by notable figures.

#coronavirus how is this possible? Really puzzled pic.twitter.com/W3BYYbs2F3

As we began fact-checking the viral claim, we first tried to collect more information about the book which allegedly predicted the coronavirus outbreak in 1981. As per the information available on the Wikipedia page of the aforementioned novel, “The thriller novel was written by American writer Dean Koontz in 1981. The book focuses on a mother who sets out on a quest to find out if her son truly did die one year ago, or if he is still alive.” Detailed information about the said Wikipedia page can be viewed below.

The Eyes of Darkness

The Eyes of Darkness is a thriller novel by American writer Dean Koontz, released in 1981. The book focuses on a mother who sets out on a quest to find out if her son truly did die one year ago, or if he is still alive.

We searched Google Books to see if the book is available on the platform. We could not get the whole book to read but using a feature of Google Books, we were able to see what’s inside the book. The version which we found first is the same as mentioned in the claim i.e written by Jean Koontz (Pseudonym: Leigh Nichols) in 1981. 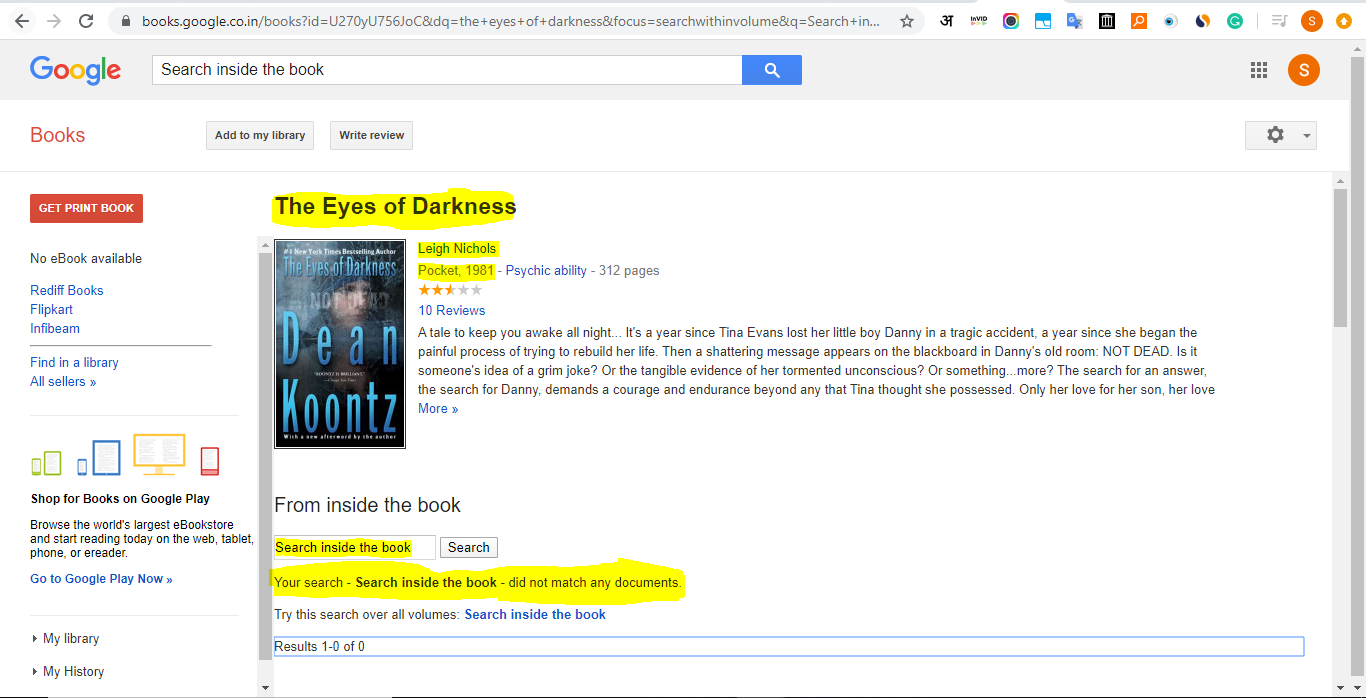 While searching for more information on the said novel, we also learned that there are several other editions/versions of the novel published in different years by different publications. However, as you can see above, the search feature on Google Books allows you to perform a search query for the content of the book. First of all, we wanted to check if there is a mention of Wuhan 400 virus in the book. We searched the book using the keyword ‘400’ to see if there is a mention of any such virus. As a result of our search query, we learned that the keyword ‘400’ is mentioned thrice in the book but the prefixed word with the said keyword i.e ‘400’ was not the same as the claim. The said virus is named ‘Wuhan 400’ in the viral stills of the book while in the original book the virus is named ‘Gorki 400’. 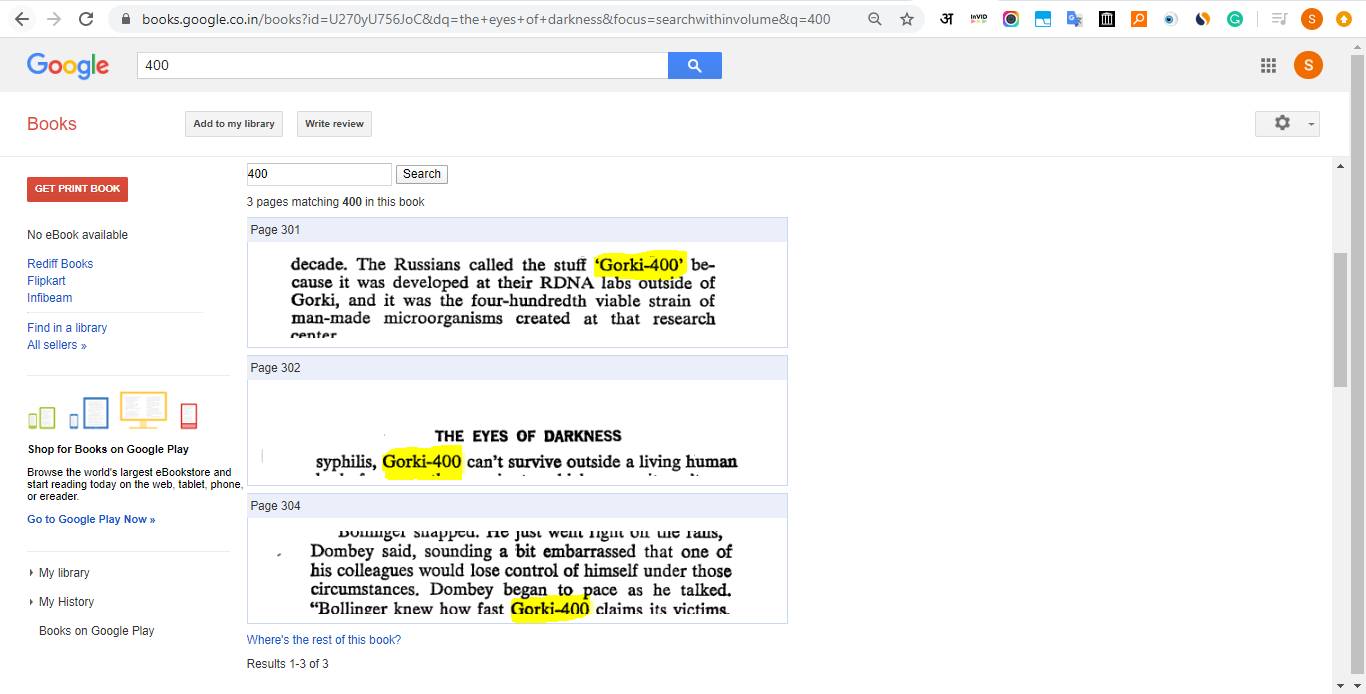 Now, since we have learned that the said virus is not ‘Wuhan 400’ but ‘Gorki 400’, we tried to know more about it. We further searched the book with the keyword ‘Gorki’ but we couldn’t find more information apart from what we had found earlier already. We then searched the book using the keyword ‘Russian’, we found more mentions of Gorki-400 in the book written by Jean Koontz.

Similarly, we searched what’s inside the book with the keyword ‘Russian’ and we found more mentions of Gorki-400 in the book. 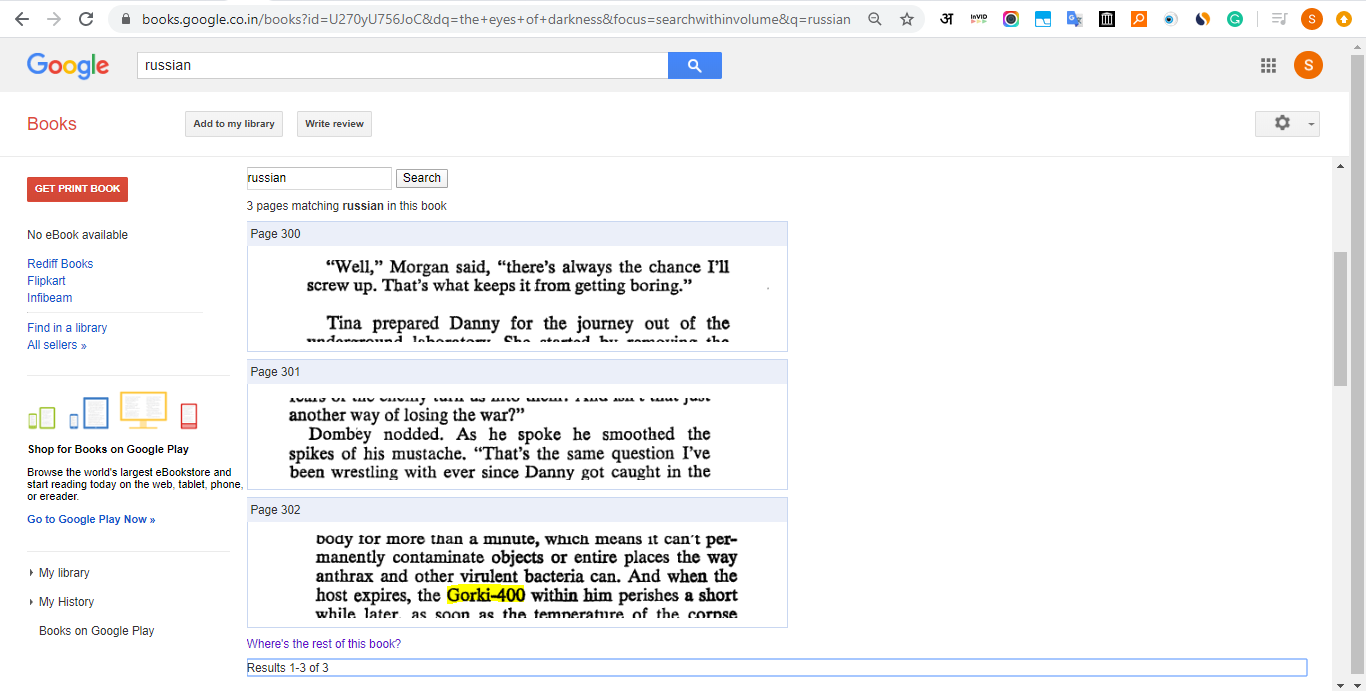 As it is evident from our fact-check above that the word ‘Wuhan-400’ was not mentioned in the original book, we tried to know when it was inserted or replaced. We also tried to know the nature of the contents in the book in order to know if it is fiction.

We tried searching for why it is being claimed that ‘Wuhan-400’ is mentioned in the article. We found that ‘Gorki-400’ was replaced with ‘Wuhan-400’ in other versions of the book, for instance, 1989 Edition of the same book. For instance, a soft copy of another version of the same book can be viewed below. After reading the book and from various excerpts presented above, we got to know that the description of the novel coronavirus and the one mentioned in the novel (Wuhan-400) are not the same.

A year had passed since little Danny’s death-a year since his mother began the painful process of ac-ceptance. But tonight, Tina Evans swore she saw her Danny in a stranger’s car. Then she dreamed that Danny was alive. And when she awoke, she found a message waiting for her in Danny’s bedroom-two disturbing words scrawled on his chalkboard: NOT DEAD.

Notably, it is duly mentioned in the book that it is a work of fiction. 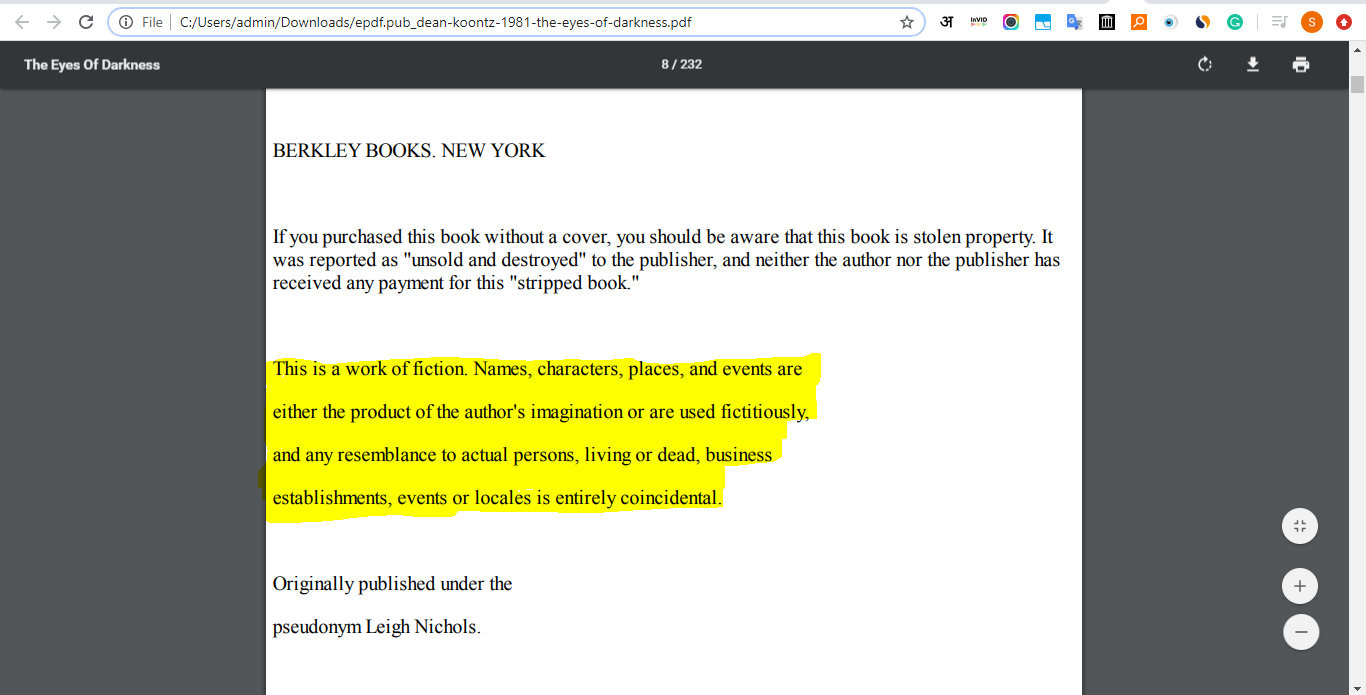 We also checked Dean Koontz’s Twitter handle for more information or clarification on the issue but we didn’t find anything relevant there.

We also checked media reports on the issue and we found a report published by South China Morning Post that lists the causes behind the replacement of the virus from ‘Gorki-400’ to ‘Wuhan-400’. An excerpt from the SCMP report reads, “Dean Koontz’s The Eyes of Darkness originally contained details of a man-made virus called Gorki-400 from the Russian city of Gorki. The change to Wuhan came when the book was released in hardback under Koontz’s own name in 1989 – at the end of the Cold War.”

Much has been made of Dean Koontz’s 1981 book The Eyes of Darkness which appeared to have predicted the recent coronavirus outbreak – but in the original version the villain was Russia, not China.

Now, we tried finding more details on the other stills in the claim. During our investigation, we found that only one screengrab belongs to the said novel i.e ‘The Eyes of Darkness’. The other two screengrabs are the same, an excerpt from the other screengrab reads, “In around 2020 a severe pneumonia-like illness will spread throughout the globe, attacking the lungs and bronchial tubes resisting all known treatments.” The excerpt also mentioned that the illness will vanish soon after its arrival. “Almost more baffling than the illness itself will be the fact that it will suddenly vanish as quickly as it arrives, attack again ten years later and then disappear completely.”

When we searched Google using different keywords from the aforementioned excerpt, we found that the other screengrab doesn’t belong to the novel ‘The Eyes of Darkness’ written by Dean Koontz. We also learned that the viral page belongs to a book named “End Of Days: Predictions and prophecies about the end of the world Paperback” written by Sylvia Browne & Lindsay Harrison in 2008.

Humans have long been concerned with the ultimate clash of civilizations, but never more so than now. Religious wars, global terrorism, and genocide have all helped to usher in the Anxiety Age. Who better to lead the way out than popular psychic Sylvia Browne?

As we tried to fact-check the fourth screengrab in the claim, we found that the screengrab of Wikipedia page details of the book ‘The Eyes of Darkness’ is true. The same can be viewed below.

The Eyes of Darkness

The Eyes of Darkness is a thriller novel by American writer Dean Koontz, released in 1981. The book focuses on a mother who sets out on a quest to find out if her son truly did die one year ago, or if he is still alive.

Hence it is evident from our fact-check that the claim is ‘Partially True’ as one of the screengrabs indeed belongs to the fiction novel ‘The Eyes of Darkness’ by Dean Koontz but the other screengrabs belong to the book named ‘End of Days’ by Sylvia Browne & Lindsay Harrison.

Facebook
Twitter
WhatsApp
Linkedin
Previous articleNo, This Video is Not Related to Delhi Violence. Here’s a Fact Check
Next articleOld And Unrelated Video of Gwalior Police Beating A Woman Passed off as Delhi Police Brutality