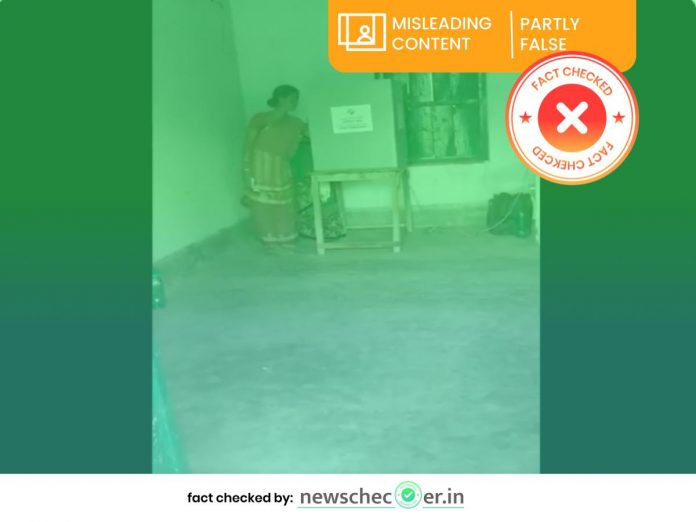 Keya Ghosh, a member of BJP Mahila Morcha in West Bengal, tweeted a video with the caption, “Got from WA. This is how TMC has been doing rigging,” implying vote rigging.

The 28-second video shows an election-day volunteer directing a citizen to vote for a certain party on the Electronic Voting Machine (EVM). Shared on 8 April, this video has received over 21.1K views and 485 retweets at the time of writing.

Other Twitter users shared this claim with the video as well.

With the fourth phase of West Bengal’s Legislative Assembly elections over, campaigning is in full swing for the upcoming phase five on 17 April. Citizens will be casting their vote for 45 seats in the next phase in four districts. Four persons were reported to be killed in the Cooch Behar district during clashes between the Trinamool Congress party and the Bharatiya Janata Party in the fourth phase of elections in the state.

A reverse image search of keyframes from the video on Yandex.com led us to a 2019 post by a Facebook user who’d shared this same 28-second video. Translated from Hindi to English, the caption reads, “Do your best to reach this video in all corners of India and the world. I did it. And you can’t imagine how much work you’re doing.”

Another user shared this video on Youtube on 18 December 2019 with the caption, “Elections for new india.”

A Youtube channel named The Sentinel Front also shared this video in May 2019 with the caption, “Democracy at work in West Bengal-TSF.”

Political Editor at Hindustan Times, Vinod Sharma, tweeted this video in May 2019 exclaiming his shock. His post has garnered over 9.3K likes and 8.1K retweets so far.

Note that these videos were shared during the 2019 General elections in India.

You can read about this claim in our Bangla fact-check as well.

Our research makes it clear that Keya Ghosh’s recent tweet with a video showing alleged vote rigging during West Bengal’s ongoing State Assembly Elections is misleading. The video in context is online since the 2019 General Elections in India.