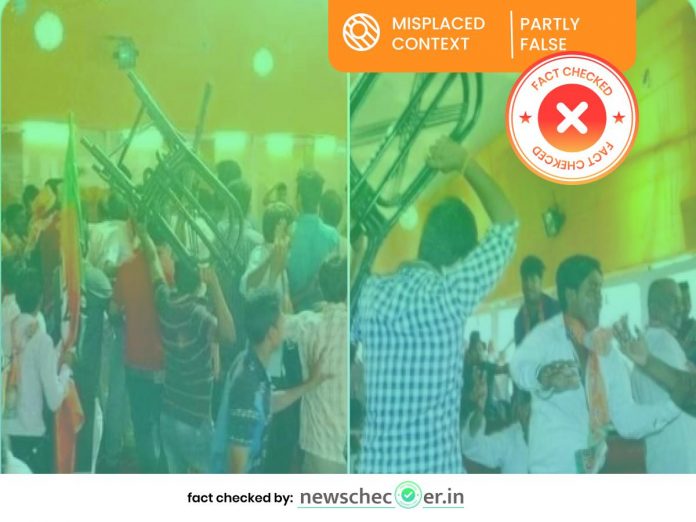 The image shows a group of people fighting with chairs being thrown around, some of whom can be seen wearing the Bharatiya Janata Party’s flag.

Five Indian states—Assam, West Bengal, Kerala, Puducherry, and Tamil Nadu are gearing up for their State Assembly elections next week. All involved parties can be seen rallying and playing the unwarranted social media game to lure in voters. Related mis/disinformation is being circulated from party officials and social media users alike.

More examples of the claim being shared by other online users can be seen below.

One users caption with the images in context reads, “Cadres of BJP Bengal rehearsing inside their party office of how they will transform #Bengal into Sonar Bangla. #NoVoteToBJP”

More examples can be seen below.

Through a combination of Google reverse image search and relevant keywords we found a FirstPost article from 3 March 2016. Titled, “Crowds and clashes: The day before West Bengal went to the polls,” the article includes the viral images from the claim.

Caption of the first image from the claim reads, “BJP workers clash with each other at a party workers’ convention for actress and BJP candidate from Howrah North Assembly constituency Rupa Ganguly in Howrah.” This image is credited to the Press Trust of India in the article.

We also found the claim’s second image in the article, but taken from a different angle.

On further search, we found these images shared by Twitter users in 2016.

Times of India and Aaj Tak reported about the incident when BJP workers clashed with each other during a meeting attended by then BJP candidate Rupa Ganguly from UP’s Howrah seat.

“Roopa and the party’s joint general secretary (organization) Shiv Prakash went to attend a party workers’ meeting in Shyam Gardens. Some leaders, who were reportedly not invited, tried to “gate-crash” into the meeting, one among them even attempting to reach the dais. This triggered the chaos,” reads the Times of India 2016 report.

You can read about this claim in our Hindi and Bangla fact-checks as well.

As of now, our sources include PTI and news reports. If we gather any new information on this claim, we will update this fact-check.

Our research makes it clear that the viral images have nothing to with the upcoming Bengal election. These images are at least four years old.