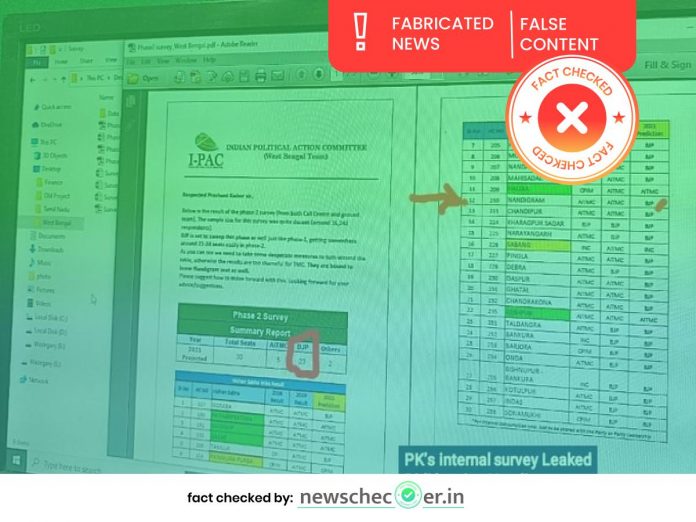 Second phase of West Bengal’s State Assembly Elections have come to an end and political drama between parties are at an all-time high. Amid this, an image of a survey allegedly by the Indian Political Action Committee (I-PAC) is shared with the claim that Mamata Banerjee will not win in Bengal’s Nandigram district and that BJP is likely to win in phase 2.

On 30 March, BJP spokesperson Suresh Nakhua shared this claim with the caption, “Didler is losing Nandigram as per internal survey by PK.” His tweet garnered 1.2K retweets and over 5K likes at the time of writing.

Other Twitter users have shared this claim as well.

As per the Election Commission of India (ECI) West Bengal’s election results will be announced on 2 May.

We found a 26 March press release by the ECI which details guidelines on conducting exit polls or publishing any related material. It reads that from 7:00 A.M on 27 March to 7.30 PM on 29 April, “conducting any exit poll and publishing or publicizing the result of exit poll by means of the print or electronic media or in any other manner shall be prohibited in the ongoing General Elections to the Legislative Assemblies of Assam, Kerala, Tamil Nadu, West Bengal & Puducherry and Bye Elections to the House of the People and Legislative Assemblies of various states.”

On 31 March I-PAC refuted the claim on their Twitter account. Their post reads, “Facing imminent defeat, @BJP4Bengal has now gone down to the level of using FAKE surveys in the name of I-PAC to keep the morale of their workers up!!

P.S: In I-PAC, no one uses desktops so at-least be smart in your effort to create fake survey / reports!”

The All India Trinamool Congress (AITC) party also responded to the claim in context, calling it fake. Posted on 29 March their tweet reads, “BJP IS LOSING BIG IN NANDIGRAM! Anticipating a huge loss, @BJP4Bengal has resorted to doing what it does best- SPREAD FAKE NEWS! This document is fake & has ZERO credibility, just like BJP’s leaders & promises! Circulating such fake reports won’t work!”

You can read about this claim in our Hindi and Bangla fact-check as well.

Our research makes it clear that the images of a survey showing BJP’s win in the second phase of West Bengal’s state elections are fake. I-PAC and the AITC party have denied these claims.