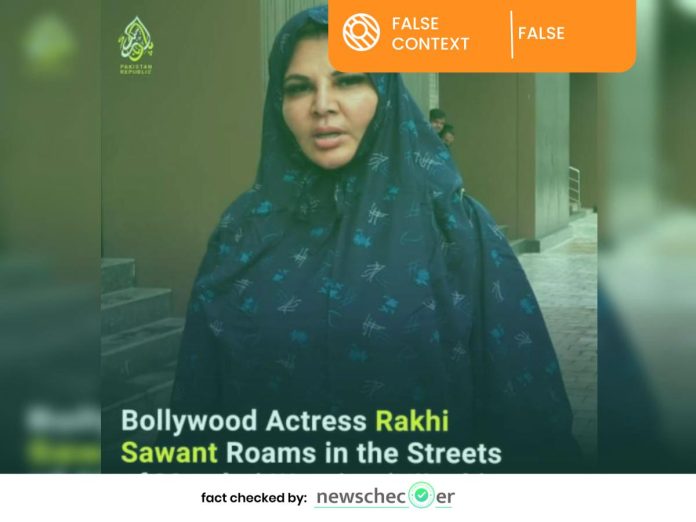 Karnataka has seen protests across the state since muslim students wearing hijab were denied entry into the school premises for not following the school dress code. Since then the situation has reached a knife’s edge with the matter being debated in the Karnataka High Court. Social media has been abuzz with misinformation since the protests over hijab began in Udupi. In light of these events, a picture of Rakhi Sawant wearing a hijab has gone viral on social media with the claim ‘Rakhi Sawant comes out in support of hijab.’

Newschecker found a tweet on Twitter showing Rakhi Sawant wearing a hijab. The tweet has garnered around 10,000 likes and more than 1300 retweets on the platform with the caption ‘Idc what you think about her, She’s a Queen.’

The Karnataka hijab row has become a major talking point across the country since the incidents that occurred earlier this month. Nobel Laureate Malala Yousafzai has also commented on the issue in support of the girls wearing hijab. The matter is currently being debated in the High Court. Karnataka CM Bommai has told the state legislative assembly that his government will abide by the High Court’s interim order on the Hijab row.

On conducting a keyword search, Newschecker found a Youtube interview video on the channel Viral Bollywood uploaded on 31 August, 2021. In the video Rakhi Sawant can be seen wearing the hijab and is heard discussing the latest episode of Bigg Boss which was popular then.

Upon performing a keyword search on Google, Newschecker found a news report by Times of India from 30 August, 2021. The video report shows Rakhi Sawant arriving in a hijab at her gym and where she comments about Bigg Boss. The video in the news report shows similar images to the images shown in the viral social media posts.

Newschecker also checked the social media handles of Rakhi Sawant on Instagram and Facebook and found no statements about her commenting on the Hijab Row.

Our investigation proves that the picture of Rakhi Sawant in a Hijab that has gone viral on social media is from August 2021. It has nothing to do with the recent hijab controversy.

Vaibhav Bhujang
Vaibhav is a part of Newschecker’s English team, where he spots and debunks all kinds of misinformation, making the rounds on the internet. A Journalism graduate from St. Xavier's College, Mumbai, he holds an M.A degree in Philosophy and an M.Phil from Delhi University.
Facebook
Twitter
WhatsApp
Linkedin
Previous article
Viral Video Of Burj Khalifa Displaying Muskan’s Picture Is Manipulated
Next article
Viral Video Claiming To Show ‘Muslim Youth’ Beheading ‘Hindu Girl’ In Surat Is Misleading, Incident Has No Communal Angle