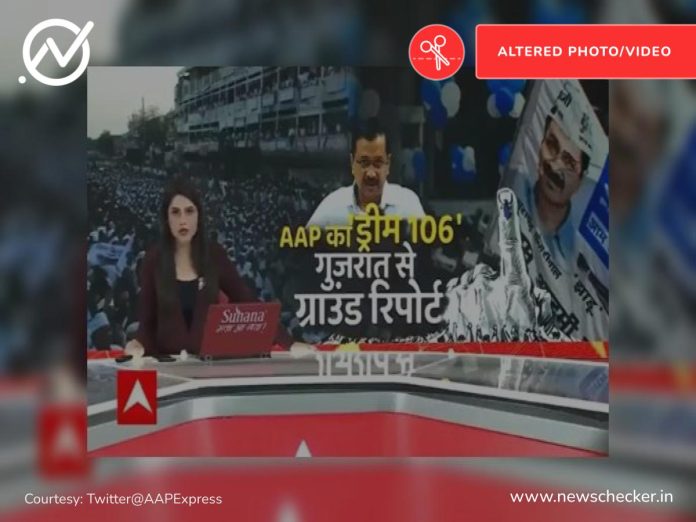 (This article was originally published in Newschecker Hindi by Arjun Deodia)

In the ABP News video it is being claimed that the Congress was not in the running, leaving AAP to compete against an incumbent BJP.  According to the report, due to the increasing dominance of the Aam Aadmi Party, the influence of PM Modi is also failing and the BJP is afraid that Kejriwal may dent his stronghold in Gujarat.

The video has been shared on Twitter by user @AAPExpress along with the caption ‘Must watch this video to understand the mood of Gujarat ‘ when translated via Google translate.

The video was also shared by Delhi Chief Minister and AAP leader Arvind Kejriwal himself which has since been deleted.

The anchor  in the viral video states that the AAP is prepared to take power in Gujarat since Prime Minister Narendra Modi and the BJP’s plans and roadshows are failing to have the intended effect on potential voters. The narrator goes on to say the Congress is not trying to win the polls in Gujarat and is completely out of the running. The ticker, graphics, photos, and text displayed in the viral video, in addition to the narration, all forecast an AAP victory in Gujarat.

We started our investigation by conducting a reverse search of the key-frames of the video on Google and found a tweet thread by Anshul Singh of The Lallantop calling out the video as edited.

Upon going through ABP’s YouTube channel we found a video they posted on October 16, 2022, with the title translated from Hindi to, “What is the truth of Arvind Kejriwal’s assertion on the IB report? View our live coverage of the Gujarat election.”

The voiceover in the original video refers to a press conference Kejriwal gave on October 2, 2022 during which he said that AAP will form the government in Gujarat in light of a recent Intelligence Bureau report. Following an explanation of Kejriwal’s assertion, the voiceover lists the candidates running for the AAP in the yet-to-be-announced Gujarat elections.

Arvind Kejriwal had claimed earlier according to an Intelligence Bureau report, that if elections were held in Gujarat on that day, AAP would win by a landslide.

The ABP News segment sought to pick holes in Kejriwal’s claims and questioned AAP supporters on the basis of their claim.

Vaibhav Bhujang
Vaibhav is a part of Newschecker’s English team, where he spots and debunks all kinds of misinformation, making the rounds on the internet. A Journalism graduate from St. Xavier's College, Mumbai, he holds an M.A degree in Philosophy and an M.Phil from Delhi University.
Facebook
Twitter
WhatsApp
Linkedin
Previous article
BJP Govt In UP Levies 6% GST On Sunday Church Mass Collection? No, Viral Image Is Edited
Next article
Weekly Wrap: False Claims Around #BharatJodoYatra, Misinformation On Gujarat Polls, Russian Invasion & More