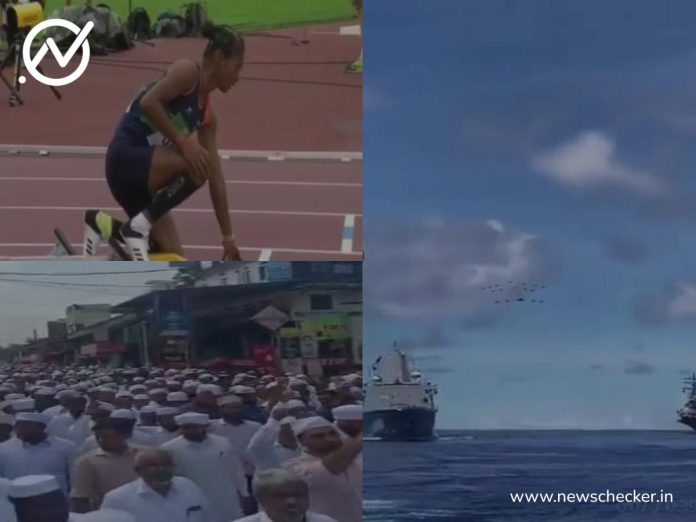 US House of Representatives Speaker Nancy Pelosi’s Taiwan tour became the hot topic, not only for television news channels and prime time shows, but also for misinformation peddlers on social media across borders. While several users shared an old video Of US Navy Aircrafts falsely claiming to show their recent movement near Taiwan, others shared unrelated video of missiles lighting up the night sky from 2020, claiming to show Chinese ‘welcoming’ Pelosi with ‘fireworks’.

From social media posts that gave a communal twist to the protest against Kerala IAS officer’s appointment as Alappuzha district collector to a fake story about Sudha Murty’s childhood, here are top five fact checks this week:

A viral forward claiming to be the life story of Infosys chairperson Sudha Murty is being widely shared online. It is claimed that a stranger named Mrs. Usha Bhattacharya paid for the train ticket of a runaway girl named Chitra while travelling from Bombay to Bangalore and took the girl to an NGO so she could be taken care of. Chitra, the viral posts claims, grew up to be Infosys chairperson Sudha Murty. Newschecker found the claim to be false. Read more here.

A video showing a large gathering of men-attired in white clothes and skull caps- marching with placards and sloganeering, is going viral on social media platforms. Those sharing the video claim that it showed a protest by Muslims in Kerala against the appointment of a Hindu Brahmin IAS officer. Newschecker found that the video is being shared out of context, giving a communal colour to the event. Read more here.

Old Video Of US Navy Aircrafts Shared As Recent

Amid US House of Representatives Speaker Nancy Pelosi’s visit to Taiwan, a video showing military aircrafts flying in formation accompanied by military vessels, is going viral. Users who shared the video claimed that the US Navy war planes were seen close to Taiwan. Newschecker found that the video is not recent, but dates back to at least April 2021. Read more here.

The recent Taiwan tour by Nancy Pelosi has escalated the decades-long tension between Beijing and Taipei. In this backdrop, a video showing a night sky, lit up by a barrage of missiles fired from what appears to be a coast line, is being widely shared by social media users, claiming to show “China welcoming Pelosi with fireworks.” Newschecker found the claim to be untrue. Read more here.

A video is going viral claiming to show Indian sprinter Hima Das winning the gold medal at the ongoing Commonwealth Games in Birmingham. Newschecker found the claim to be untrue. The video actually shows Hima Das’ historic win at the IAAF World U20 Championships at Tampere in 2018 and not at CWG 2022. Read more here.

Vasudha Beri
Vasudha noticed the growing problem of mis/disinformation online after studying New Media at ACJ in Chennai and became interested in separating facts from fiction. She is interested in learning how global issues affect individuals on a micro level. Before joining Newschecker’s English team, she was working with Latestly.
Facebook
Twitter
WhatsApp
Linkedin
Previous article
Man Singing Old Hindi Song In Viral Video Not From Kenya, 2014 Video Shared With False Claim
Next article
Govt Suffered ‘Record Loss’ In 5G Spectrum Auction? No, Viral Images Of News Reports Are Edited

Video Of Man Rescuing A Deer With Frozen Snout Is From Kazakhstan, Not US