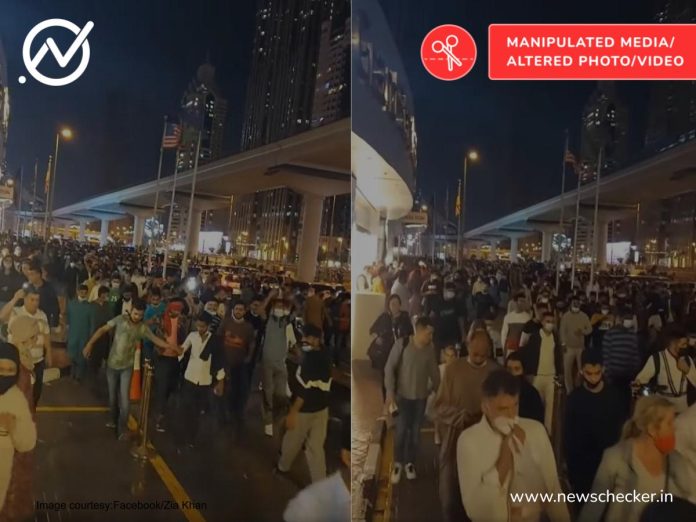 Following Imran Khan’s ouster from power last week, supporters of the cricketer-turned-politician staged massive protests within Pakistan and at several cities across the globe against his removal. In this background, a video claiming to show people marching on the streets of Dubai in “favour of Imran Khan,” is being widely shared on social media platforms. Newschecker found the claim to be untrue.

The video is doing the rounds on Facebook with the caption “UAE Dubai In favor of Imran Khan.”

We found several such posts on Twitter claiming to show protests in Dubai in support of Imran Khan.

Last week, Pakistan PM Imran Khan was deposed by a no-confidence vote against him in the national assembly. The no-confidence motion, which required 172 votes in the 342-seat parliament to pass, was supported by 174 politicians. Opposition leader Shahbaz Sharif was elected as the new Prime Minister of Pakistan following Khan’s ouster.

Newschecker scanned through the comment sections of the post and found a tweet by user ‘@tabraizghani’ who posted another video showing the same location, but devoid of the crowd. He wrote, “Stop spreading Fake Videos no such protest has happened. You are liars like your Leader! Awam has rejected you stop showing pictures of traffic jams, 14 august & fake videos.”

Taking clues from the clip shared by ‘@tabraizghani’, we began searching for the exact location where the video was captured, on Google street view with the help of some keywords and were able to locate the exact place as Sheikh Zayed road.

We continued our investigation and found a tweet by user ‘@Mianhaqqnawaz’, who had shared an image saying that there is no protest in the area seen in the viral video.

Newschecker Urdu team contacted @Mianhaqqnawaz over Twitter, followed by a telephonic conversation, who said, “I live near the place seen in the viral video. The video is old.”

We further analysed the audio heard in the viral clip, as many users pointed out its ‘dubbed’, and could hear phrases like “ISF, Insaaf ka naara ISF….” Taking clues, we continued our investigation and found a video uploaded on YouTube channel of ISFNews on February 8, 2012. On carefully listening to the clip, we found that the tone, pitch and wording of the slogans heard in the viral video were similar to this video.

Further, we inspected several visuals from the protest in Dubai in support of Imran Khan, shared by news outlets and concluded that none of the images or videos have anything similar to what can be seen in the viral video. You can read such reports here and here.

The claim that the viral video shows a protest in Dubai in favour of Imran Khan following his ouster from power in Pakistan is untrue. It is an old video and the audio heard in the background relates to a separate event.

(The article was originally published in Newschecker Urdu.)

Vasudha Beri
Vasudha noticed the growing problem of mis/disinformation online after studying New Media at ACJ in Chennai and became interested in separating facts from fiction. She is interested in learning how global issues affect individuals on a micro level. Before joining Newschecker’s English team, she was working with Latestly.
Facebook
Twitter
WhatsApp
Linkedin
Previous article
Did JNU Students Fake Injuries During Recent Clashes At The Campus? No,  Viral Claim Is Misleading
Next article
Weekly Wrap: Misleading Claim On India’s Debt, False Video Of Suman Kalyanpur And More