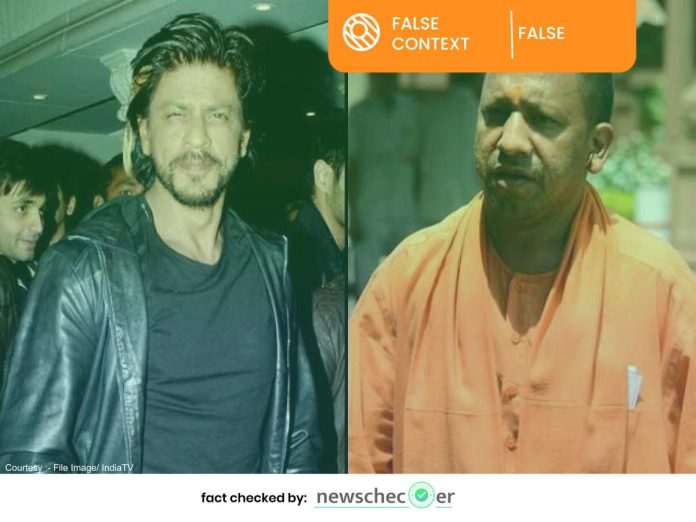 The video has been shared by Twitter user @VedaAshok2 along with the caption ‘#BoycottShahrukhKhan Film #BoycottPathan. Listen Bold Statement from Yogi Aadityanath, CM of U.P. #JagoHindu’

Shah Rukh Khan has been in the news recently after he released a poster for his upcoming film ‘Pathan’ on his social media. Newschecker recently debunked a claim by social media users that Shah Rukh Khan might have to sell his house if the film doesn’t do well.

Newschecker conducted a Google reverse image search on the key-frames of the viral video to ascertain its authenticity and found a tweet by ANI uploaded on 4th November, 2015. The tweet contained the same video which has now gone viral with a different claim.

Upon performing a keyword search, Newschecker found a news article uploaded by The Indian Express uploaded on 5th November, 2015.

According to the article “after actor Shah Rukh Khan said there was “growing intolerance” in the country, BJP MP Yogi Adityanath Wednesday compared him to Pakistani terrorist and 26/11 mastermind Hafiz Saeed, and said he is “welcome” to go to Pakistan.”

Yogi Adityanath went on to say “that if the “majority community” were to boycott his films, Shah Rukh would have to wander the streets like a “common Muslim”. “I am saying these people are speaking the language of terror. I think there is no difference in the language of Shah Rukh Khan and Hafiz Saeed.”

Newschecker also found another news article uploaded by The Hindustan Times on 4th November, 2015 which relayed the same information.

According to the investigation conducted by Newschecker, an old video from 2015 is being passed off as UP CM Yogi Aditynath asking people to boycott Shah Rukh Khan’s latest film ‘Pathan.’

Vaibhav Bhujang
Vaibhav is a part of Newschecker’s English team, where he spots and debunks all kinds of misinformation, making the rounds on the internet. A Journalism graduate from St. Xavier's College, Mumbai, he holds an M.A degree in Philosophy and an M.Phil from Delhi University.
Facebook
Twitter
WhatsApp
Linkedin
Previous article
Video Of Youth Climbing Mosque & Waving Saffron Flag Is Not From Karauli Violence
Next article
Viral Video Of Burj Khalifa Displaying Imran Khan’s Address To Pakistan Is Manipulated